Hariprasad is a passionate, creative and enthusiastic freelance artist who believes in the power of art in inspiring educating and illuminating the young minds at seed. Hariprasad completed his BFA from Raja Ravi Varma College of Fine Arts, Kerala University (2004 – 2008). He has also acquired a masters degree in painting from Sarojini Naidu School of Arts and Communication, University of Hyderabad, Hyderabad, Andhra Pradesh.

He has won many awards for his exemplary works in the field of visual art – To name a few, Lalita Kala Academy Award for Young Artist, 2007, Lalita Kala Academy Scholarship, 2012 and also conceived and organized ‘Red Home’, a public interactive art project in Hyderabad, 2011. Through the years, Hariprasad has demonstrated his expertise in the field through some very prominent exhibitions throughout the state namely, Annual Exhibition of Painting and Sculpture by Lalita Kala Academy, 2007, Group Exhibition ‘Intrinsic Interventions’ at Durbar Hall, Cochin, 2007, ‘Turn Towards’, a group Exhibition of paintings at Chaitanya Art Gallery, Cochin, 2008 and Lalitha Kala Academy painting camp at kottayam, 2015.

Hariprasad is a self driven personality and believes in being continuously engaged in the practice of visual art and enriching his perspectives. His immense passion for art has led him to explore different mediums of painting and illustrations.

He is a talented personality with a strong sense for community-based art which inspired him to organize a lot of community interactive projects across the district like ‘Chalanam’ and ‘OCHA’ a community interactive project with ‘mannan’ community in Kumali(2017-2018) and a creative workshop for tribal children in bison valley(20 respectively). He conducts creative workshops for children in schools as well. Hariprasad works with ABC, Kochi Muziris biennale as a facilitator.

His flair for teaching and igniting the young fresh minds has led him to join seed as core faculty and has completed two years successfully. Hariprasad continues to train students across the district in various private institutions and continues to follow his passion for visual art through public projects statewide. 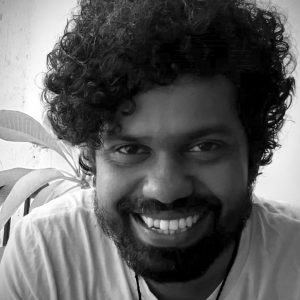